Carol and Jeff desired a kitchen with more transitional design elements incorporated. Due to their style preferences, Plain & Fancy seemed the best fit for creating the condo kitchen design the couple was after.

Not unlike many other couples across the country, Carol and Jeff are empty nesters. They decided to downsize and purchase a condominium in Wilmette, IL. This is where Colette comes into the story. Previously Colette had worked with the couple's son and his wife and kids, as well as their best friends on a number of renovations in and around the Chicago area. Due to her excellent professional relationship with the general contractor on these prior projects she was recommended to Carol and Jeff.

Colette Rodon Hornof is the founder and designer of Vesta. At Vesta, the aim is to infuse every client's home with warmth and welcome. Anyone who has worked with Colette would tell you that she is known for designing luxurious living space designs, which key on style and comfort. One way that this is accomplished is through a breathtaking showroom that puts cabinetry, appliances, fixtures and finishes on display. Above all, she takes pride in delivering what customers had always hoped and dreamed of. 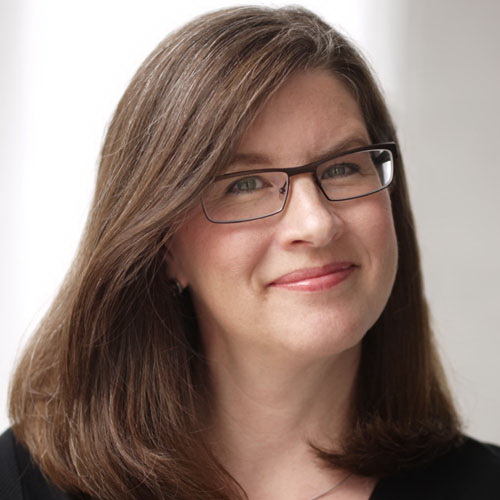 The Process of Creating the Perfect Condo Kitchen Design

Carol and Jeff desired a kitchen with more transitional design elements incorporated. Due to their style preferences, Colette felt Plain & Fancy was the best fit for creating the condo kitchen design the couple was after. She was right. They fell in love with Plain & Fancy's Illusion door as well as the lovely Fawn finish. Beyond the finer details, the couple wanted to improve the space both aesthetically and functionally. 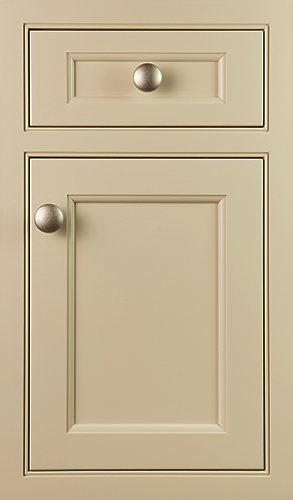 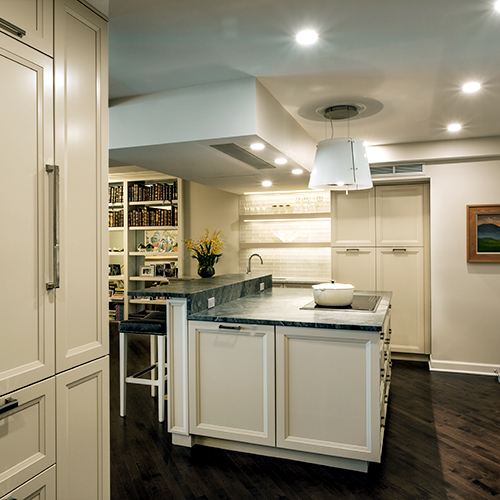 Although the end result turned out even better than they'd envisioned the renovation didn't come without a few challenges. The first was having to work with the various ceiling heights. Since the renovation occurred in a condominium the ceiling would drop in strange areas in order to bring mechanicals and HVAC through the space. The transition to the living room was awkward and a challenge to overcome as well. I asked Colette what she enjoyed most about the project and surprisingly she told me that what she liked the most about the renovation was being able to manipulate the space, more specifically the different ceiling heights. Even though it was the biggest challenge it also was the most rewarding and that is why it seems to stick in her mind as her favorite part of the renovation.

Another challenge involved relocating the sink. The original location was off of a peninsula, but the couple preferred it to be along the back wall. Along with the help of the general contractor, Colette solved this problem by tapping into the existing plumbing in the laundry room to create the new drain. Overcoming these obstacles were just part of the process to create Carol and Jeff's dream kitchen. Colette put it this way, "Overcoming those issues made the space more purposeful and less awkward."

The End Result: Better Than They Envisioned

Even though Carol and Jeff were empty nesters their kids lived closeby and visit often. The newly completed renovations enable the whole family to fit comfortably in the home and even allowed the grandchildren enough room to run around and play. Carol, who enjoyed hosting frequent gatherings for family and friends, now enjoyed a kitchen she could cook in and still feel connected to the rest of the group. The kitchen was even setup for multiple cooks which just continued the feeling of togetherness in the home. 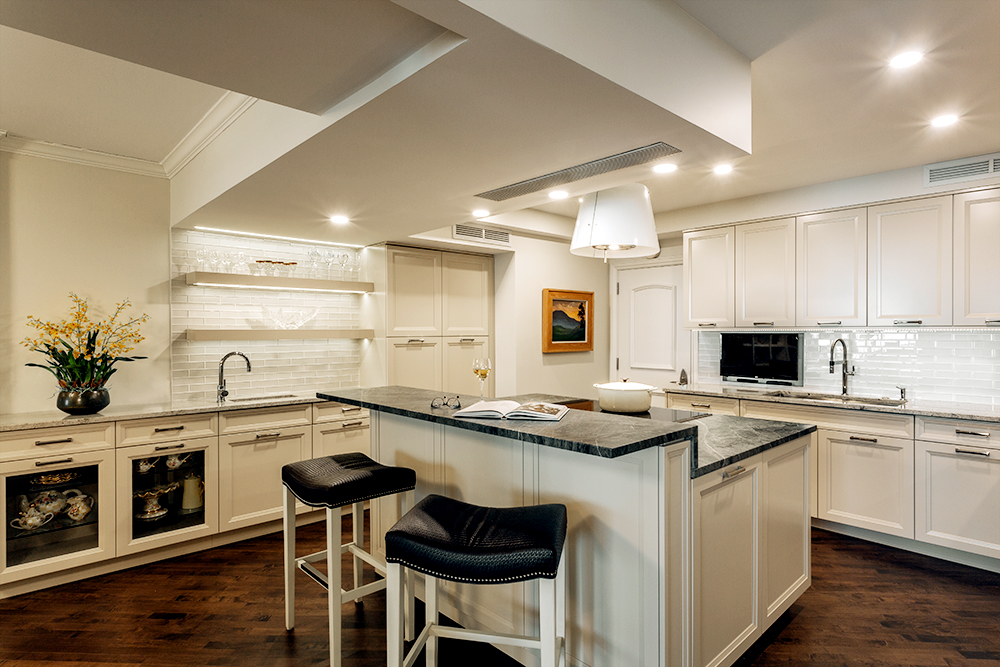 Colette made it a point to say that even though she was the lead designer on the project it was most definitely a team effort. The homeowners, the contractor, the interior designer and herself met and discussed the couple's wants and desires as well as why they wanted to include certain elements, many times throughout the process. Colette also made sure the installers in the field were asking the right questions and paying attention to the little things to ensure everything came out just as they had envisioned. 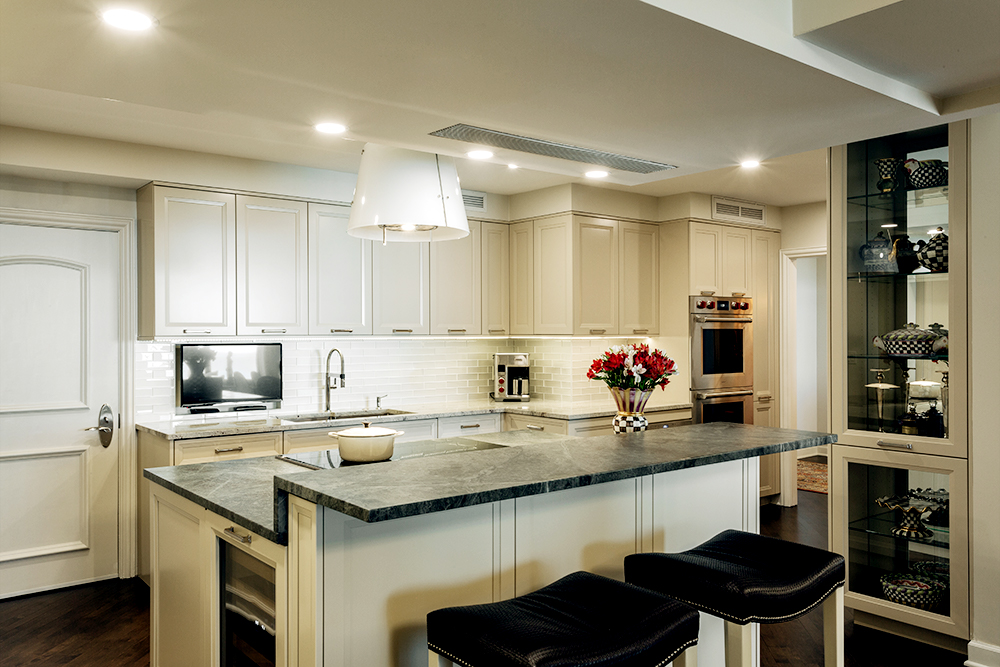 Carol and Jeff's kitchen renovation came out better than they ever could have envisioned.

Finally, she gushed about how great Carol and Jeff were to work with. "They knew what they wanted and it didn't take them long to get there," she said. The couple was excited by not only the end result, but enjoyed the steps it took to get there. Probably the best measurement of the success of the project was what Colette answered when I asked her about working with the homeowners, "They were great," she said. "I'd work with them 12 times again, if I could."

As the longest operating business in our dealer portfolio, Plain & Fancy is honored to have Hancock Lumber as a collaborator with their team of designers and network of kitchen design showrooms representing our product lines.

Cabinet Door Styles From Then to Now: What’s In Store for the Next Generation?

It's no secret that interior design trends are always changing. While we often focus on colors and finishes, however, subtle elements are also bound to evolve. This is especially evident as we examine seemingly basic cabinet doors. Over the years, some of their most noteworthy changes have involved panel styling.

The Power of Integrated Cabinet LEDs

When you imagine perfectly designed cabinets, you might picture Shaker doors or gorgeous hardwood. Like most people, however, you probably don't pay too much attention to lighting.